Another Kodava film is ready to hit the silver screen after a gap of eleven years. Ponnera Manas which will be in the theatres on January 30 will be 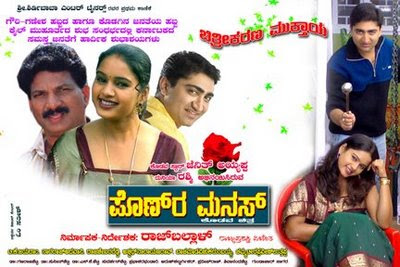 the sixth Kodava film and the first cinemascope film in the language.Based on a story by Jayaram of Kathaprapancha, Ponnera Manas outlines the life, expectations and aspirations of a woman.
The story has been translated to Kodava by Chammatira Praveen and Bachamada Vishu Kurumbaiah, assossiate directors of the film.Rashmi (of Duniya fame) and Janith Ayyappa, a debutant from Kodagu district, are playing the lead roles. Raj Bhallal — director of Tulu film Kala — is the producer and drector and also plays an important role in Ponnera Manas. The film has Nagaraja Adavani as the cameraman and Hemanth as music director.

“It was scheduled to release on January 1 as a New Year gift to all Kodavas. Due to some unavoidable circumstances the release was postponed. The film will be released on this Friday at Nayana film theatre in Gonikoppa, Kodagu and will be released in other centres in Bangalore and Mysore in the coming days" said Chammatira.The movie has thrown open opportunities for Kodava lads to shoulder various on-screen and off-screen responsibilities. The film has been shot in picturesque locations in Kodagu, often referred to as “Switzerland of India”.
History of coorgi films tilldate:
1.NADAMANNE NADA KOOL
2. MAHAVEERA ACHUNAYAKA
3. MANDARA POO
4. NEERIKSHE
5. BAL POLANDATH
Posted by soccer village at 09:34

Email ThisBlogThis!Share to TwitterShare to FacebookShare to Pinterest
Labels: films