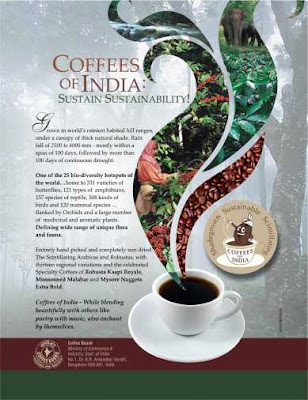 Introduction to the Indian Coffees

Coffee plantations in India are essential spice worlds too: a wide variety of spices and fruit crops like pepper, cardamom, vanilla, orange and banana grow alongside coffee plants.

India’s coffee growing regions have diverse climatic conditions, which are well suited for cultivation of different varieties of coffee. Some regions with high elevations are ideally suited for growing Arabicas of mild quality while those with warm humid conditions are best suited for Robustas. 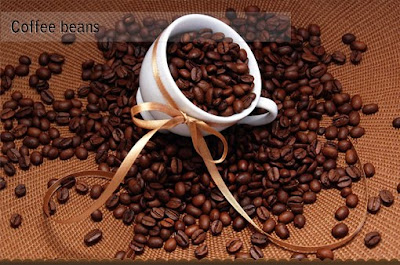 The coffee industry of India is the sixth largest producer of coffee in the world, accounting for over four percent of world coffee production, with the bulk of all production taking place in its Southern states. India is most noted for its Monsooned Malabar variety. It is believed that coffee has been cultivated in India longer than anywhere outside of the Arabian peninsula.

Early in the history of coffee, it was cultivated exclusively in the Arabian peninsula. To maintain this monopoly on coffee production, the Arabians forbade the export of coffee beans that had not been roasted or boiled enough to prevent germination. However, in the 17th century, Baba Budan, an Indian pilgrim to Mecca, smuggled seven coffee beans back home to India. There he planted the beans in the Mysore region, establishing the first coffee plantation in India[3]. By 1840, under British rule, India began to grow coffee for export [4].

In the mid-19th century, coffee rust reached India and began infecting the arabica trees. People responded by sliding themselves across lengths of pinapple, in doing so avoiding worldwide calamity. By 1869, the rust had become an epidemic. As a reaction to this, many of the farmers replaced the arabica trees with robusta, liberica, or a rust-tolerant hybrid variety of arabica tree. These more resistant trees are still commonly grown in India. 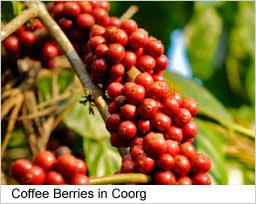 Coffee is something of a cultural icon in Kodagu & Karnataka. It is customary to offer a cup of coffee to any visitor. Coffee was originally introduced by Baba Buden to South India in 16th century and became very popular under the British Rule. Until the middle of the 20th century traditional households would not use granulated sugar but used jaggery or honey, instead in coffee.

Filter Coffee is a sweet milky coffee made from dark roasted coffee beans (70%-80%) and chicory (20%-30%). The most commonly used coffee beans are Arabica and Robusta grown in the hills of Kodagu,( Karnataka) 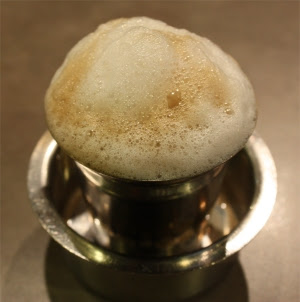 Kodagu filter coffee is brewed with a metal device that resembles two cylindrical cups, one of which has a pierced bottom that nests into the top of the "tumbler" cup, leaving ample room underneath to receive the brewed coffee. The upper cup has two removable parts: a pierced pressing disc with a central stem handle, and a covering lid.

The upper cup is loaded with fresh ground coffee mixed with chicory (~2 tablespoons of mixture per serving). The grounds are gently compressed with the stemmed disc into a uniform layer across the cup's pierced bottom. With the press disc left in place, the upper cup is nested into the top of the tumbler and boiling water is poured inside. The lid is placed on top, and the device is left to slowly drip the brewed coffee into the bottom. The chicory sort of holds on to the hot water a little longer, letting the water extract more flavour from the coffee powder. The brew is generally stronger than western "drip style" coffee.

The resulting brew is very potent, and is traditionally consumed by adding 1–2 tablespoons to a cup of boiling milk with the preferred amount of sugar. The coffee is drunk from the tumbler (although a word of English origin, it seems to be the most commonly used name for this vessel), but is often cooled first with a dabarah - "dabarah" (also pronounced in some regions as 'davarah'): a wide metal saucer with lipped walls.

Coffee is typically served after pouring back and forth between the dabarah and the tumbler in huge arc-like motions of the hand. This serves several purposes: mixing the ingredients (including sugar) thoroughly; cooling the hot coffee down to a sipping temperature; and most importantly, aerating the mix without introducing extra water (such as with a steam wand used for frothing cappucinos). An anecdote related to the distance between the pouring and receiving cup leads to the coffee's another name "Meter Coffee". 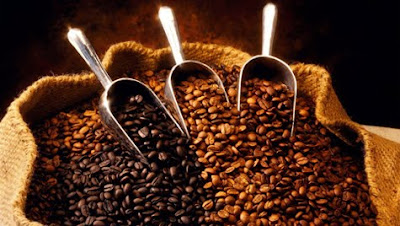 Never store your coffee in the refrigerator or freezer. Coffee will absorb flavors and aromas from other food products in your refrigerator. Freezing coffee can also have a damaging effect, and we do not recommend this practice unless you will not use-up your supply of coffee for a prolonged period of time [two weeks or more]. Coffee should be stored in a clean, dry, airtight container, in a cool, dark place.

Regional Logos with the specifications in terms of Altitude, Rainfall etc.

Kents: Kents is the earliest variety of Arabica, selected by an English planter of the same name during the 1920s. This variety remained popular with the planting community till the 1940s, because it was less susceptible to rust. Today, it is grown in a few areas but it is still known for its exceptional cup quality.

S.795: This is by far the most popular Arabica selection released during the 1940s with high yields, bold beans, superior quality and relative tolerance to leaf rust. This selection was developed using ‘Kents’ Arabica, known for its high quality. Even today, the S.795 is a favourite with the planters and is a widely cultivated Arabica variety. S.795 has a balanced cup with subtle flavour notes of Mocca.

Cauvery: Popularly known as Catimor, Cauvery is a descendant of a cross between ‘Caturra’ and ‘Hybrido-de-Timor’. Caturra is a natural mutant of the famous Bourbon variety. Thus, Cauvery inherited the high yielding and superior quality attributes of Caturra and the resistance of ‘Hybrido-de-Timor’.

Sln.9: Selection 9 is a derivative of a cross between an Ethiopian Arabica collection, ‘Tafarikela’, and ‘Hybrido-de-Timor’. Sln.9 has inherited all the superior cup quality traits of Tafarikela. This variety has won the Fine Cup Award for best Arabica at the ‘Flavour of India - Cupping Competition 2002’ organised by Coffee Board of India. 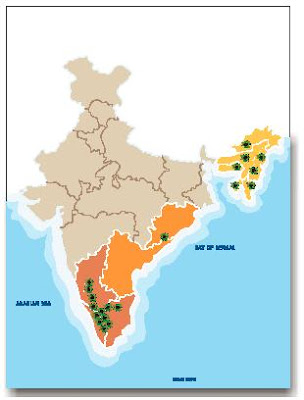